The Season So Far

The first two competitions in the ECA calendar have been held already this season - the Duncan Stewart Trophy and the Junior Women's Championships.

The ECA held the third Duncan Stewart Trophy at Dumfries Ice Bowl with 4 teams competing. Unfortunately Duncan's widow, Mary, could not be with us this year owing to illness. The competition is open to individuals who are then drawn into teams at the start of the weekend after they have been graded by a competitions committee to make sure that 4 skips do not play together.

The original idea for the competition came from current ECA President, Alison Arthur, who was there as the solitary spectator throughout the weekend and presented the prizes of unique individual wooden curling stones to each member of the winning team.

The 4 skips this year were John Sharp, John Brown, Phil Barton and Doug Andrews and there were 4 games to be played - firstly a complete round robin and then the top two would play off, and the bottom two, with ranking based on wins, ends, shots up and shots.

Results were varied with some pretty high scores and not that many close games in the end: 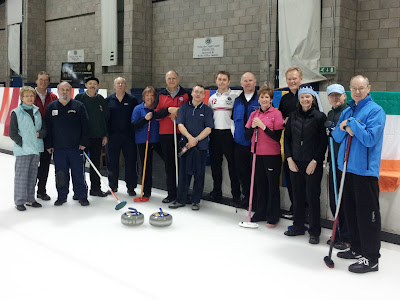 It was the first time that the ECA have visited Dumfries Ice Bowl and we were made very welcome with signs welcoming us and an England flag prominent by the rinks we were playing on. It was quite a surprise to see how quiet it was as well as over the whole of the weekend there were no other games going on, just one person practising on Saturday and 3 of our wheelchair curlers practising on the Sunday.

When we found ourselves two players short on Saturday morning we were lucky to find Iain Jamieson in the ice rink cafeteria talking to Susan Young whom he had met on the RCCC Adult course. He was available for both sessions on Saturday and he got hold of another local player, Doris McQueen for the second session on Saturday. We invited the local players out for dinner and Doris brought her husband Duncan with her. During dinner we discovered that Duncan had been the manager at Streatham Ice Rink in 1982 who had arranged with Duncan Stewart for there to be curling after the ice hockey on a Sunday night. Quite an amazing coincidence that circumstances led to him being there on Saturday night as we toasted Duncan Stewart for the work he did for curling in London and England.

And here are a few more pictures of the action at Dumfries: 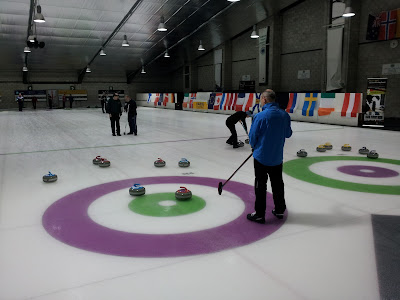 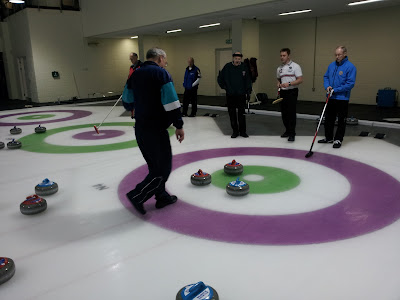 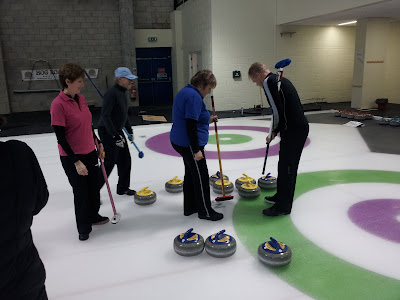 Finally many thanks to Graham Sloan for helping us at the weekend and we hope to return to Dumfries some time soon - it is actually where I was born and lived for 4 years - and the house we lived in is approximately 5 minutes walk from the rink - now that would be bliss these days!!

Two teams competed in this championship at Fenton's over a series of 5 games with the first team to win 3 games being the Champions. There was a surprise in the first game when the team skipped by Hetty Garnier and consisting of most of last year's winners was defeated by the challenging team of Niamh Fenton by 8-7. However after that first close game,  Team Garnier then rattled off three wins in a row (10-1, 9-3, 12-2)  to take the series and thus qualify to represent England at the European Junior Challenge at Prague in January. Niamh Fenton will be joining them as 5th player - the full team is Hetty Garnier, Angharad Ward, Naomi Robinson, Lucy Sparks and Niamh Fenton.

They will be joined there by a Junior Men's team of Ben Fowler, Oliver Kendall, Conor Simpson, Cormac Barry and Renz Bunag who had no challengers to compete against. Both teams will be playing in the Lockerbie Junior Invitation in December.
Posted by John Brown at 15:01