The London Curling Club held a weekend competition for mixed teams for the Ann Beeley Trophy at Fentons at the weekend. Ann Beeley was a member of London 30 years ago who was knocked off her bike and killed and the trophy was presented by her sister with the proviso it had to be played for mixed teams as that had been Ann's great pleasure. Unfortunately Jean Beeley died last year but she had always taken a keen interest in how the trophy was doing.

The Trophy was first played for at Alexandra Palace as part of the programme of competitions that the then Province of London staged throughout the season. When Alexandra Palace closed for curling, it was awarded to the best mixed team at the Province's Scottish weekend where the main trophy was the Sir Alexander Fleming Trophy. On two occasions the same team was victorious in both trophies over the weekend as the Province toured the Scottish ice rinks from year-to-year - Kinross, Pitlochry, Lochgoilhead, Forest Hills, Letham Grange and Greenacres all played host to the Fleming / Beeley weekend - worryingly 4 of those 6 rinks have now closed!!!

After a three year hiatus it was then awarded to the winners of the SECC mixed league at Fenton's for a couple of years but there has been another spell of three years since then until this year it was staged a month before the ECA Mixed Championships in the hope of attracting some of the teams entered in that for practice. In the event 3 of the 6 participants were teams who had entered to practise and it was one of those, skipped by Andrew Woolston with Anna Fowler, Ben Fowler and Hetty Garnier who won all 4 of their games at the weekend to take the trophy over Jamie Malton on 3 wins and the rest of the 6 teams trailing behind in their wake. 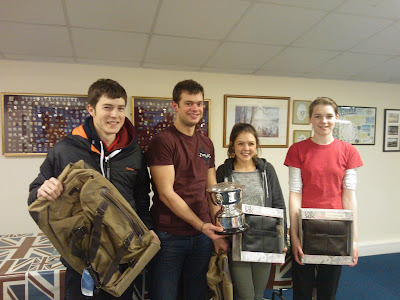