Sorry about the clumsy title but wanted to make sure that you read to the end of this post are there are two distinct stories included.

"Results so far point to a Sharp v Zachary final as both should win their games tomorrow morning at 0930, but this is curling......"

After 7 ends and 15 stones in the respective last session round robin games John Sharp was peels at 7-7 and had a half hidden stone to remove from the rings to win his game against John Brown, while Bryan Zachary, also tied at 7-7, could only wait and see if Fiona Hawker would outdraw his last stone.

In the end John did and Fiona didn't and we had a final between John who was undefeated and Bryan who had only lost the one game (to John) in the round robin. If Fiona had drawn the shot to beat Bryan then we could all have gone home early as Bryan would have been 2 wins behind John in the final standings.

And the final also went the distance - one down with the hammer, John had to draw the 4 foot to get his 2 and win the Championship and this he duly achieved to win 5-4 and so a trip to Scotland in September for the European Mixed Championships awaits John, Lorna Rettig, Nigel Patrick and Alison Hemmings, all of whom are Scottish born and took up curling while still youngsters in Scotland. 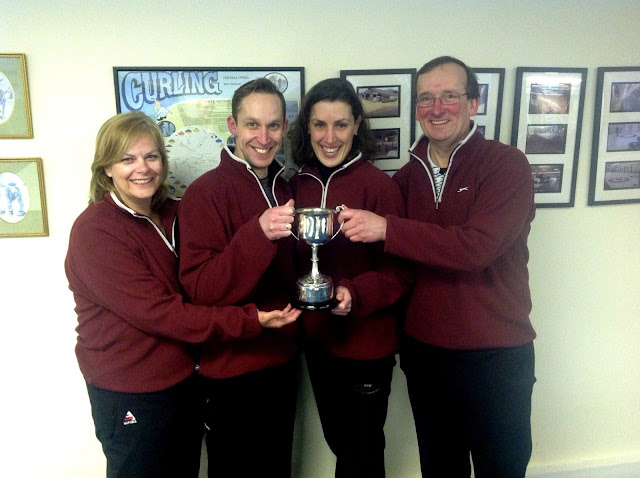 
John won the Scottish Schools and Scottish Juniors while Lorna was runner-up in the Scottish Schools and Nigel was runner up in the National Pairs in their past lives. Alison was in Sweden for the Europeans this year with the English ladies, Lorna has played in the Europeans 6 times, and also in the World Mixed Doubles while John has played in 4 World Mixed Doubles, 1 with Lorna and also in the World Junior Championship for Scotland and the World Senior Championship for England!!

Following the example of the RCCC, the ECA has started a Junior Skills Award programme for the many young curlers coming to Fenton's,  and this is also available of course to Juniors elsewhere in the country.

The first assessment evening was held last Tuesday and 6 of the successful candidates received their Orange Award certificates on Sunday at the Mixed Championship presentation as shown below. It is hoped they will go on now to the higher grades - Bronze, Silver and Gold and that others will follow their example. There is a lower Yellow Grade also available. 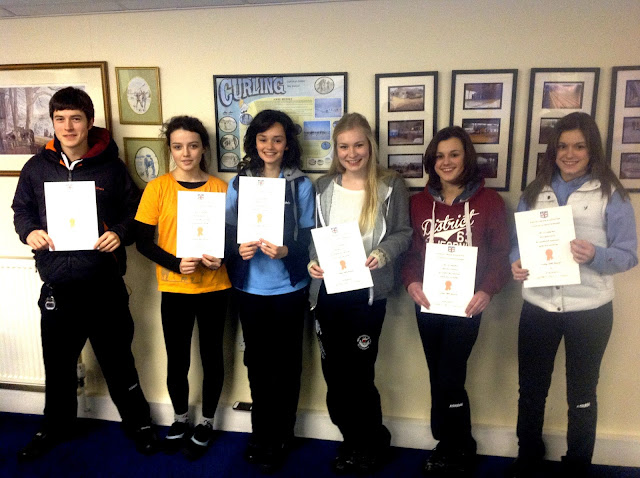